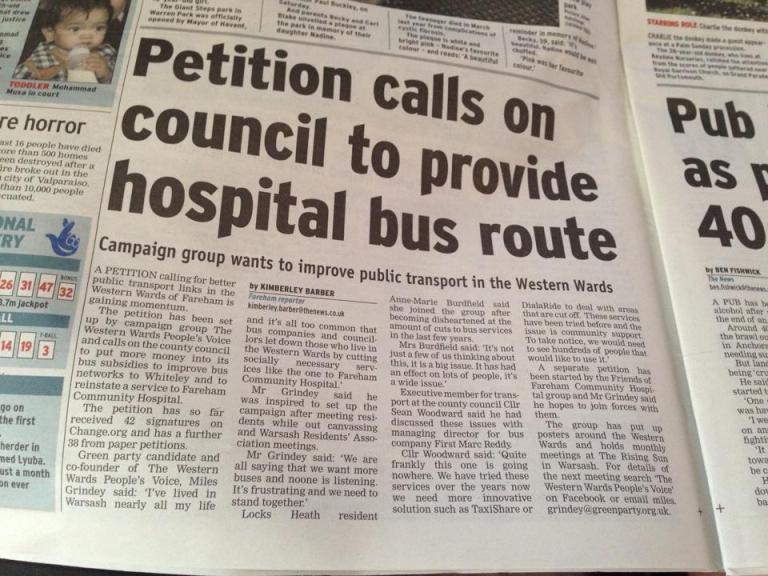 The #MoreBuses petition has received 200 signatures on change.org, here is the email I sent to Cllr Seàn Woodward:

I am writing to let you know that the petition started last year to petition you to work with First in order to secure a better bus service for the Western Wards of Fareham has now exceeded it’s 200 signature goal on Change.org – we have received much more in the way of paper petitions.  I’m requesting a meeting with you and representatives of Bus companies operating in Hampshire within the next fortnight to discuss with First Bus how we can have the following routes:
It abhorrent that these socially necessary routes are not running and were among the first to go when it came to the cuts that were implemented early last month. Fareham is THE MOST CAR DEPENDENT TOWN IN THE UK. That is not a medal or an honour, it is something to avoid. The fact that MY TOWN has that title, is something that I am deeply ashamed of. As part of our duty as a species to ensure our survival on this planet (there is no Planet B, Cllr Woodward) the people that we have put our faith in should be doing more to reduce our carbon emissions, at whatever level.
Many of the managers at Whiteley have said that they are on the verge of shutting their doors because their staff are unable to get to work on time, because of traffic delays. Many of those who work at Whiteley are young people, many of whom are spending the vast amount of their wages on Taxis or a car. By slashing these services, these young people feel increasingly victimised by these transport cuts that are damaging the local economy. If Welborne goes through, I can assure you – this will only get worse.
In my home village of Warsash, it deeply saddened me to hear that people who used to live down my road are finding it ever more difficult to see their family. These are people who have worked all their lives building up their pensions only to spend most of it on Taxis, adding to the congestion on our roads. Their families don’t have time to constantly drive down to see them, or get the train down from wherever they live and WALK all the way from Swanwick Train Station.
I won’t spend much more time going on, but I will say this. If you, and indeed the privatised bus companies that you hand subsidies to, have any sense of compassion or humanity for the people that you serve then you will do everything and more in your POWER to give the people the bus services that are needed desperately.
Regards
Miles”

Well last night I had the pleasure of attending yet another Warsash Residents’ Association (WRA) meeting, this time however I brought along a friend of mine from the Western Wards People’s Voice and resident. After each of the councillors finished speaking, she raised her hand and started asking about the Council’s commitment to cutting carbon emissions and also to increase buses as a vital part of keeping transport links. After this, councillors attempted to appease her frame of mind by saying “there wasn’t enough money” and one councillor said that he would love to “wave a magic wand and get all these services” – quite patronising I felt. A bit like Sir Humphrey Appleby from Yes, Minister saying “oh you can’t do that minister” without a sufficient explanation. After they finished talking, I noticed one councillor say to another “He’s planted her”.  When I updated people on Facebook, one said “You’ve been out punned by a Tory!”

After the meeting had finished, and after getting another few signatures for the petition, I went over to one councillor that I’m on good terms with and he seemed most displeased. I was attacked for being “political” and disrupting the “neutrality of the Residents’ Association” and that my friend was a Green Party plant. I called her over and asked her in front of this councillor, “Are you a Green Party member?” she was absolutely shocked that someone people voted for became so scared and threatened that they would go so low as to accuse people of having a different opinion as being a “plant”.

The councillor tried to defend the council’s position of “not our problem” regarding buses, to which I made the following point:

You have been chosen by the people of this ward to represent their interests, their interests are more buses – how do I know this? Because unlike you lot I’ve been out canvassing and instead of pushing issues on them, I’ve asked them what bothers them. You have a position to say to Seán Woodward that people want these buses, so you’re here shrugging your shoulders when in fact you aren’t clearly representing people of this area – don’t tell me you just joined with this lot because it was Blue since time began?

I mean it is true, how can you justify denying people you’re supposed to be representing what they want? The funniest thing was that they thought it was most inappropriate that I, a person living in a “free society”, should dare criticise councillors! They need to start listening and taking action rather than giving every excuse not to.

Residents having a different opinion without any political intervention? Perish the thought!

The title explains itself, we need some councillors who will actually listen to us and represent our interests. Unfortunately this is not what we’re getting. Two key issues keep coming up every time I speak to someone in the street, in local pubs or indeed into/from college. Buses and Parking.  The major issue in Warsash is that you will find it an absolute pain to get to Whiteley, you will find it an absolute pain to work around those once-every-two-hour buses. If you also needed to get to Fareham Community Hospital from Warsash and you couldn’t get a lift or afford a taxi – there’s no bus service to the hospital. It was cut because it was deemed “not commercially viable”.

I know what we’re fed up with councillors who are just blaming the bus companies for this lack of services. So I know that if I am elected, I will definitely make sure that there’s an improvement in the bus services to Whiteley from Warsash and also Fareham Community Hospital’s route being reinstated. It’s just getting ridiculous!

Sign the petition HERE to tell Hampshire County/Fareham Borough Councillors that you’re fed up with being ignored.

“Get the bus service  YOU  deserve “Vote Green May 22nd